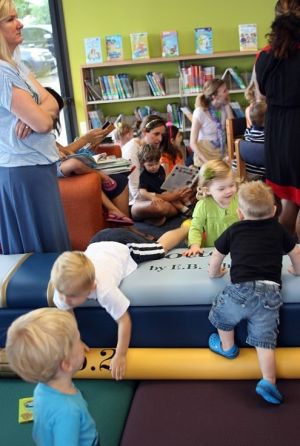 To say just about everyone in the standing-room-only crowd that flocked to the Ribbon Cutting Ceremony seemed thrilled to help celebrate the grand opening of Pearland Westside Library would be something of an understatement. Within minutes of when the doors first opened on Wednesday (May 15), the library was filled to near-capacity with book lovers of all ages.

"Wow, this place is awesome," six-year-old Madison Jamison was overheard saying to her mom. "All my friends are here and they have zillions of books everywhere. I think the library is just super-duper. Can we come back every day?"

Despite nearly being pushed aside by youngsters and other visitors eager to explore the library, city officials gathered in the lobby for a ribbon-cutting ceremony and had their own share of positive things to say.

"This library is the result of a great partnership between the citizens in west Pearland, Brazoria County officials and the City of Pearland," Mayor Tom Reid said. "It just goes to show When we work together great things can happen."

The grand opening celebration was the culmination of two-years' worth of planning and collaboration between Pearland city planners, councilmembers, the Brazoria County Library System and county officials.

"This is something that has taken a long time to come together and I'm truly thankful to everyone who worked with us to help make this library become a reality, most especially to (City Manager) Bill Eisen who somehow found a way to come up with the needed funding over time," Pearland City Councilmember Scott Sherman said, who has helped take leadership of the project since his 2009 election to the City Council. "I'm also excited for everyone who is going to be able to enjoy this facility in the coming years."

Brazoria County Commissioner Stacy Adams said he appreciated the help and support the Friends of the Westside Library had offered during the planning process.

"I have never worked with a more patient and understanding group of people," he said. "They were there for us every step of the way. We could not have done it without their hard work and support. Their help was instrumental in making the project a success."

The wheels for the project were officially set in motion in January 2013 when Construction Masters of Houston was awarded a $375,000 contract to build out a 6,000 square-foot space in the HEB Shopping Center located at 2803 Business Center Drive. Architect Michael H. Smith of Wilson Architectural Group was hired to design the space.

"One technique we used was to design a specific palette of colors that would work together to create a vibrant, colorful space," Smith said when contacted by The Journal. "We were also very careful to use materials that would minimize outside noise as much as possible."

The Pearland Westside Library is now open Tuesday and Wednesday from 10 a.m. to 9 p.m. and on Wednesday, Thursday and Friday, the hours are 10 a.m. to 6 p.m. The library is closed Sunday and Monday.