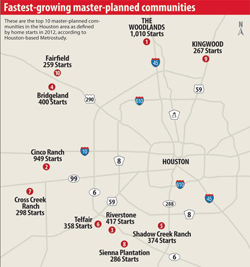 With its increasing population and skyrocketing economy, the Houston area is one of the best places in the country to find master-planned community developers continuously moving dirt, industry trackers say.

Many of the top-selling master-planned communities — a collection of neighborhoods and subdivisions that are controlled by a developer — can be found more than 20 miles from the Central Business District and in all directions: from The Woodlands in the north to Pearland in the south.

"Master-planned communities in the Houston area have a 30 percent market share of all home starts," said David Jarvis, director at Houston-based Metrostudy, a housing market research company. "Houston and the counties have no zoning, so the MPCs are attractive to a large number of people who would like to know how the entire community is planned to be developed. Through the recession, homebuyers gravitated toward the planned communities as a protected haven for home values. We watched this in the 1980s recession. In general, MPCs are the replacement for zoning."

In 2013, Houston can expect to see more of the same forward momentum, Jarvis said.

"The banks that lend to the land development industry are still not lending where they need to be to keep up with demand," he said. "But the top 10 seem to put enough lots on the ground to maintain the strong demand."

Bridgeland, currently at No. 4 on Metrostudy's top 10 list for master-planned communities in terms of home starts, will likely spike with activity in the next 12 months, Jarvis predicts.

"The Grand Parkway is being built literally right through their property, which will give Bridgeland better access back to the jobs in the Energy Corridor," he said.

There are more than 20 master-planned developments in the Houston area. Here is more information on the most active in recent months.

Into the Wild West

Katy is one of the fastest-growing areas in Houston and home building is doing its best to keep up with the demand — many in the form of master-planned communities and subdivisions, local development professionals say.<

On the far west side of the Houston area, Katy sits past the Energy Corridor along Interstate 10.

Katy is home to the 7,500-acre master-planned community, Cinco Ranch, which feeds into the coveted Katy Independent School District. This community is one to keep an eye on, said Lance LaCour, president and CEO of the Katy Area Economic Development Council.

"Their home sales are 30 percent above what they expected," he said. "There's dirt flying everywhere."

There is no more land south of I-10 to build a master-planned community in Katy, but along the soon-to-be Grand Parkway, more land will likely become part of established or new communities, LaCour said.

Other master-planned communities nearby include the 3,200-acre Cross Creek Ranch and the 1,400-acre Firethorne project, both in Fort Bend County.

The five most active master-planned communities in the Houston area, according to HBJ research, by order of the most home starts in 2012: